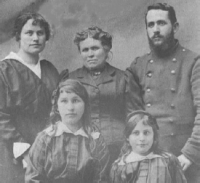 Henri Grialou was born in 1894 at Le Gua, Aveyron (southern France). His mother, Marie, came from farming stock and at that time his father, Auguste, worked in the mines. Henri was the third child in a family which led a hard life and suffered the social deprivations of the mining region of Cransac]. This area was also known for its Christian and missionary zeal. Henri‘s call to the priesthood came at an early age. When Henri was only ten, his father died suddenly and Henri received free education from the Fathers of the Holy Spirit in Suzio, Italy and in Langogne, France. He finished his schooling in Graves, Aveyron before entering the seminary at Rodez in 1911. 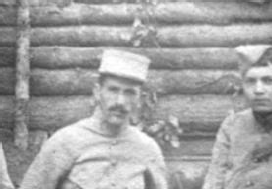 Interrupting his studies for the priesthood, he volunteered for the army in 1913. War followed and for five years Henri Grialou took part in the major campaigns at Argonne, Verdun and Chemin des Dames …
In 1919 he was able to resume his seminary studies at Rodez, where he said “I made a definitive choice to become a priest.” 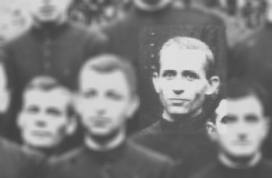 Whilst on a retreat in preparation for his ordination to the diaconate, on the evening of 13 December 1920, Henri was reading a book on the life of Saint John of the Cross when he received a sudden overwhelming revelation that God wanted him to enter Carmel.

Numerous difficulties would arise in pursuing this call. His spiritual director told him, “You are mad !” His bishop said, “You will be placing yourself at the disposal of Fr Vabre’s diocesan mission”.
His mother, whom he loved deeply, said, “You may go, I’ll be dead having killed myself before you reach Capdenac (the northern limit of Aveyron)”. However, the affection they had for each other would strengthen as a result of this trial.

On 4th February 1922, Henri Grialou was ordained a priest, and on the same day he received a sign confirming his call to Carmel. He entered Carmel at Avon (Fontainebleau) on 24 February 1922, taking the name Marie-Eugene of the Child Jesus. After his novitiate, he participated actively in the preaching that followed the beatification and canonisation of Saint Therese of Lisieux (1923/1925), and the proclamation of Saint John of the Cross as Doctor of the Church (1926). He gave himself fully to this apostolate, thus contributing to the varied forms of renewal which the Church in France experienced between the two world wars.

A life devoted to the Church

In 1928, his nomination as Prior of the Petit Castelet Monastery in Tarascon, interrupted a period of intense activity. The following year, three young women who ran a private school in Marseille, came to Fr Marie-Eugene for advice and direction on their lives. Among them was Marie Pila (1896-1974). From this first meeting a new spiritual family, Notre-Dame de Vie, would be born a few years later.

Fr Marie-Eugene was next appointed Prior at Agen (1932-36) and at Monte-Carlo (1936-37). He was then elected as a member of the General Council of the Order in Rome, where he remained until 1955, apart from the war years of 1939-1945. More specifically, he was given the responsibility for all the French speaking Carmelite monasteries. He paid special attention to the persecuted communities.
On his return to France in 1955, he was elected Provincial (1957-60 and again in 1963-67). He observed closely the upheavals of the 1950s and the new initiatives for the apostolate in the Church.
From 1965 onwards, his health gradually deteriorated. “I’m no longer made of iron, he said, but aluminum”. He concentrated his attention on the essential things : teaching the fundamentals of the spiritual life, and supporting the growing numbers of people who sought his advice. After many months of severe suffering, he died on Easter Monday, 27th March 1967, the feast day he had previously established to celebrate Notre-Dame de Vie.