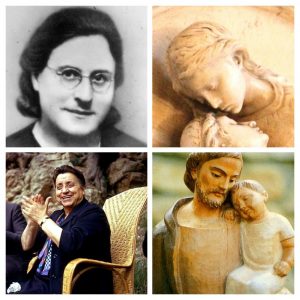 Rather than presenting the Institute’s history according to strict chronology, we have four figures – all very dear to the members of Notre Dame de Vie – for you to discover.

Each of them sheds a ray of light on the Institute’s origins and spirit :

“In the history of the Church, the great works of God have always been carried out by men and women together”, the Institute’s founder stated one day. The fundation of Notre-Dame de Vie Institute illustrates this law and Marie Pila’s personality, which was to be intimately linked to the Institute’s growth, should be mentioned here. When the fraternity was established, Marie Pila was elected person in charge. She would remain in her post until her death on 12 October 1974.

• Born in Orange on 27 October 1896, she studied at the Saint-Charles boarding school in Marseilles, then in the Sainte-Marie secondary school in Neuilly with Mme Daniélou (mother of the cardinal), and prepared her philosophy degree for submission in Paris. 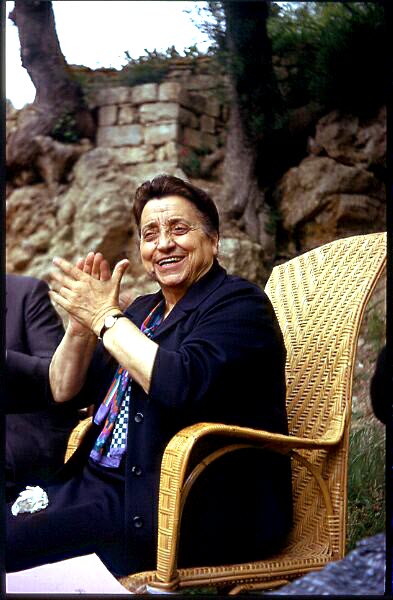 • In 1919, with two female friends who were to remain her companions for the Institute’s foundation, she opened the Notre-Dame de France secondary school in Marseilles, supported by a number of middle-class families.

• At around the age of 15, she had been gripped by reading Teresa of Avila’s Foundations. During the First World War, when she was studying in Paris, people were talking a lot about Thérèse of the Child Jesus : she read La Rose effeuillée (The plucked rose) and vowed a special love to the little saint. God had touched her heart. From 1919 to 1926, what she called ‘the emptiness of her soul’ would be formed as she read John of the Cross. ‘You have to give everything’, that was the vital feeling. When she met Fr Marie-Eugene, she was ready. The ideal that had been glimpsed was to be realized at first through her and her companions of the first ten years.

Faith of the early stages

With a strong and balanced personality, she was completely surrendered to the work of foundation and lent it all the riches of her heart and mind.

Fr Marie-Eugene paid frequent tribute to this faith of the early stages which was so precious to him, and urged his sons and daughters to follow this unique path. At the end of his life, he especially praised “the depth of [Marie Pila’s] insight and experience” and above all “the excellence of her collaboration with the work of the Holy Spirit in the Institute”.

From 1949 Marie Pila was discharged from her usual teaching duties so that she could attend more completely to the formation of members of Notre Dame de Vie. As a perfect teacher, she constantly went back to the doctrine of Fr Marie-Eugene and unpacked its significance for everyone. She was so good at adapting it to the youngest members. She officially presented the Institute to the International Congress of Discalced Carmelites in Leuven in 1953. The subject of the congress was the apostolate.

From 1959, to make Fr Marie-Eugene’s task easier and make real the fraternal link between the different Carmelite families, she welcomed the Federations of Carmelites to Venasque, and they remembered her as “a great figure for Carmel”.

On 3 October 1968 she addressed a magnificent letter to Pope Paul VI, begging for Teresa of Avila to be made a Doctor of the Church. With Fr Marie-Eugene she welcomed the secular institutes to Venasque in July 1963 for their first international meeting, and gave them a lecture on the formation of members. Later she took part in all the work on secular institutes in Rome. Her personality was greatly valued there. Wherever the institute of Notre Dame de Vie established itself, she would be there.

After the death of Fr Marie-Eugene she immediately built the spiritual centre he had planned in order to preach Carmelite spirituality. She also built a house of welcome for elderly parents, attending to every detail with care.

Her work had been realized in its entirety. Her mission on earth in the service of God and men was finished, and Marie Pila could join the founder in the furnace of love of the Holy Trinity. But before that, she had to enter the depths of annihilation like Christ. Fr Marie-Eugene had often called himself and each of his children to realize this final resemblance to the Saviour. Carrying out all her duties until she was laid low by illness, Marie Pila entered her hour of greatest suffering with the humble trust of someone who out of love surrenders to the will of the Spirit of Love so as to accomplish its mystery.

She died on 12 October 1974. She was buried in the chapel of Notre Dame de Vie next to Fr Marie-Eugene on 15 October, the feast of Teresa of Avila.

« We are loved so much, with a very strong love, powerful and wide-reaching , a very great love, yes… and without your realising it, this love accompanies you. I hope this certainty will make you go on. If you fall, it will help you rise ; when you become lukewarm, it will strengthen you : it will give you a new flame, some fire to go on further. Love is freely given… »

To know more about Marie Pila, you can read (in French) his biography “Marie Pila, une puissance d’amour non asservie…”

Berthe Grialou was born in Gua (Aveyron) on 29 December 1902. She was the last of the family’s five children and the sister and goddaughter of Fr Marie-Eugene, and there were deep supernatural bonds between them. A communion of grace linked her vocation to that of her brother and the letters he wrote to her bear witness to this. She was able to make the most of his advice and share it with others. 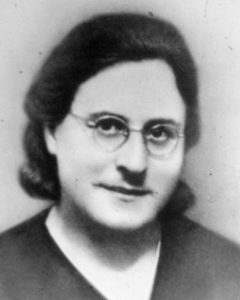 Berthe started her professional life as a primary school teacher in the village where she was born, and then became an employee in an insurance company in Paris. At this time, guided by Fr Marie-Eugene, she discovered the Carmelite saints and entered the Carmelite Third Order on 11 May 1926, the day of his Solemn Profession in the Order.

Not without resistance, she was seized by the Marian grace of Notre Dame de Vie which led her to give herself totally to the new foundation. She entered Notre Dame de Vie on 29 September 1939 when war had just broken out.
She had a special experience of the Virgin’s maternal power when Mary saved her from a serious accident on 18 October 1942. As an economist in various organizations, she carried out her tasks humbly, with a goodness that radiated around her, also showing itself in her parish and the area where she lived. She took to heart the maxim of St John of the Cross : “Where there is no love, put love”, while experiencing a painful interior poverty.

On the evening of 2 January 1958 Berthe died alone in her flat in Avignon, stripped and poor, realizing to the end the grace of St Emerentiana which Fr Marie-Eugene had given as a model to the members of the institute of Notre Dame de Vie :

« They will serve the Church humbly, as St Joseph served Jesus and Mary. » (Constitutions)

Do we need to introduce the figure of St Joseph ?
And yet … He is one of the greatest, if not the greatest saint next to (and after) the Virgin Mary. Joseph is a model of silent prayer, a model of clinging and submitting totally to the will of God revealed to him in a dream.

Along the lines of the Carmelite spiritual heritage (cf. ‘Spirituality’ section), the members of Notre Dame de Vie have a special devotion to St Joseph, as St Teresa of Avila recommended :

« I would like to persuade all souls that they should have a devotion to this glorious saint … souls of prayer, in particular, owe him filial worship … May he who has no master to teach him silent prayer take this glorious guide, and there will be no danger of him going astray. » (Life of Teresa of Avila) 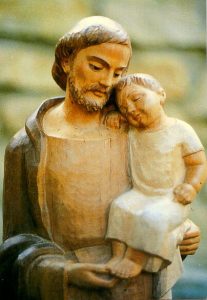 St Emerentiana : a child … making her mark from heaven

« God glorifies his saints, he sends them to us, he makes them appear to our gaze, not only to bring us graces, but to be our models. » Fr Marie-Eugene, 23 January 1960

For a number of years Fr Marie-Eugene noticed that on 23 January he received an unexpected present : a favour, the response to something worrying him at the time, a providential event … He sensed that it came from heaven. He knew that it wasn’t the presence of a great figure, but rather a child who, after giving her little gift, disappears discreetly, laughing, on the tips of her toes …

The sweet interior joy which she gave him remained in the heart of Fr Marie-Eugene. He discovered then that the Church celebrated on this date a young Roman martyr of its first centuries, St Emerentiana, the slave and friend of St Agnes. Emerentiana served Agnes humbly. She saw her live, pray and die. She was nothing, and had received everything from her, above all her faith and her love for Jesus. In her heroic faithfulness, Emerentiana followed Agnes to the end. She was stoned to death as she was going to her tomb, in a catacomb on the Via Nomentana in the Roman countryside.

For Fr Marie-Eugene, her message was crystal clear : not only for himself and the members of the institute of Notre Dame de Vie, but for those who, following St Emerentiana, walk an ordinary road, buried in the world and in every professional and social situation : allow the power of God to spread in weakness, await everything from him alone, give yourselves to his will without holding back, in the circumstances chosen for each one of you, sacrifice yourselves completely …

« She is a young girl who makes no speeches ; she expresses her message through actions. »
Fr Marie-Eugene