Home » Who are we? » The chapel of St Emerentiana

The chapel of St Emerentiana 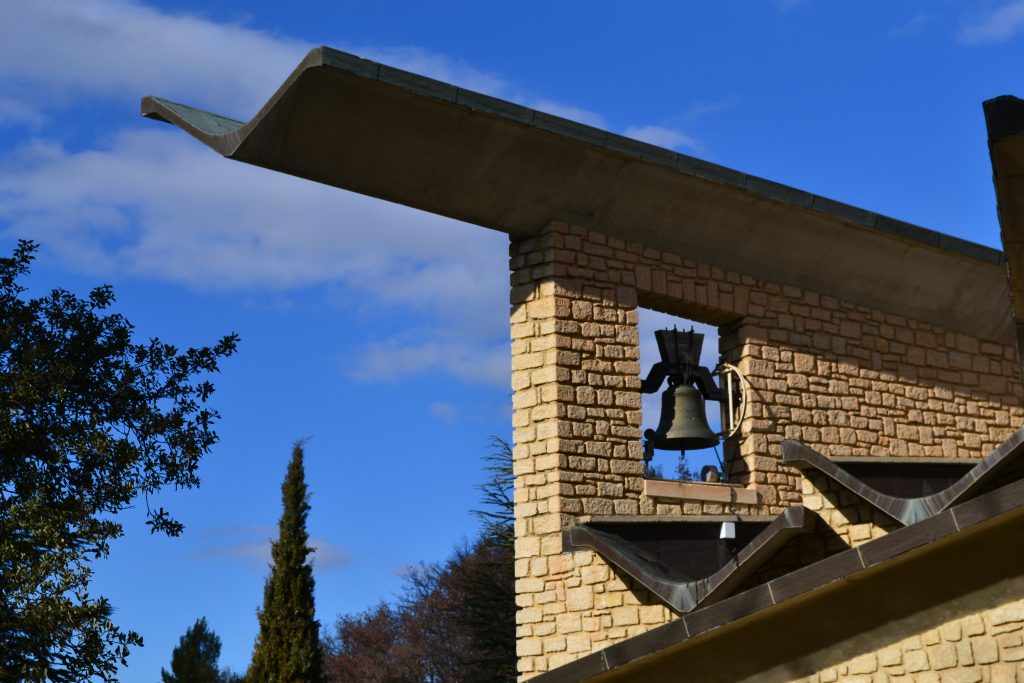 On 29 November 1975 the excavation works began which would allow the construction of the chapel of St Emerentiana. The first stone was blessed on 2 February 1976 by Fr François Retoré and the building was dedicated by Cardinal Mayer on 24 August 1977, the feast of St Bartholomew and the anniversary of the foundation of the St Joseph Carmel in Avila, the first monastery of the Teresian reform.

St Emerentiana was a young Roman slave of the fourth century, the foster sister of St Agnes, and was stoned on Agnes’ tomb.

Humble and faithful until death, she was given to the members of Notre Dame de Vie as a model by the Carmelite friar Fr Marie-Eugene of the Child Jesus, founder of the Institute.

The statue of the young saint carved by a Filipino artist is situated near the northeast entrance (on the side of the hill). She carries stones in her hands, as the signs of her martyrdom.

It’s to her that this building is dedicated. 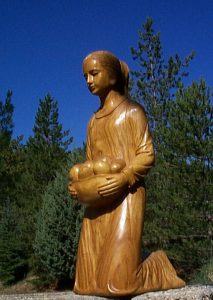 The construction of the chapel 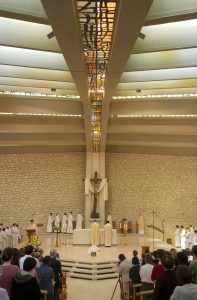 Manuel Aymerich, an architect from Madrid, drew up the plans at the request of Marie Pila, the co-founder of the institute of Notre Dame de Vie. The Moro company from Montélimar carried out the work. Its originality lies essentially in the technique allowing a building to be constructed without pillars, whose roofing, made of concrete shells, rests entirely on a central portico.

The arch of the portico is made of three concrete girders connected to each other by steel cables taut on the inside. It rests on the two north and south pillars, whose underground part is just as important as the part that can be seen. Christ and the Virgin are opposite each other, as if to carry the whole building.

The 33 shells which form the roof are fastened to the central portico. Usually used as girders in constructions of great size, here they have been placed side by side and shifted out of line so as to let the light of the sun at its height through.

The main wall of visible Crillon stone opens onto the choir like two broad arms and stands out as a significant image of the Church as the mystical body of Christ : each stone is different, each has a more or less important place, but all are necessary. Opposite, the other stone wall opens out under the shells and helps to give the effect of one great shell open to this harmonious space which follows the slope of the hill. Through a blend of stone and concrete, the sober and the daring, the project manager has succeeded in creating a place of prayer which finds its complete fulfilment in liturgical celebration.

The choir and the different elements

The choir is the point where gazes converge, as they embrace in a single movement the altar, the tabernacle and the figure of Christ on the cross. The altar, a monolith weighing five tonnes cut by Mr Altoviti from a block of Espeil rock, was extracted from a Luberon quarry and placed on a flagstone of Trani rock (Italy).

When a church is dedicated, the consecration of the altar has a particular role because it is both the place of sacrifice and the symbol of Christ. Five crosses engraved on the stone as a sign of the five wounds of Christ were anointed with holy chrism.

Following the tradition of the first Christians who celebrated Mass on the tombs of the martyrs, relics of several saints were placed in the altar on the side of the celebrant : St Emerentiana, St Siffrein évêque de Venasque et Carpentras au 6ème siècle, St Teresa of Avila, St John of the Cross, St Thérèse of Lisieux, Ste Maria Goretti and St Jean-Marie Vianney. 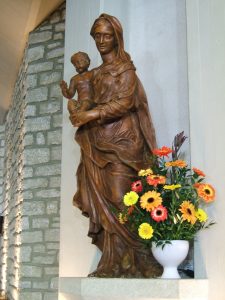 The bronze tabernacle, the place of the presence of God, is the work of the German art foundry “Bronzes Strassacker”.

The ambo or table of the Word, and all the furniture in solid oak, were designed by Jean-François Galli and produced by Jean-Marie Roux, a cabinetmaker from Carpentras, who said that he had never handled such a lovely batch of wood.

The statue of the Virgin (eighteenth century) as well as the figure of Christ (doubtless sixteenth century) come from Agen, while the old holm-oak beam which forms the cross is the gift of an inhabitant of Venasque.

The bell, the work of François Granier, a caster from Hérépian (Hérault), was ‘baptized’ Marie-Émérentienne on 27 November 1988, the feast of St Siffrein, by His Grace Kia Archbishop of Taipei (Taiwan). It shapes Christian life by its calls to prayer : the Angelus in the morning, at midday and in the evening, the Eucharist during the day. Its note (B) is in tune with those of the bells of Venasque (D, G, B, C) and Notre Dame de Vie. The 157 m2 of stained-glass windows were conceived and executed by Jean-Marie Balayn, a master glassworker from Loriol (Drôme).

The stoup at the northeast door is a creation of Martin Damay. Finally, the walls, like the altar, bear the trace of their consecration : 12 crosses, also anointed with holy chrism. They represent the 12 apostles, the spiritual columns on which the Church of Christ rests.

In asking for the consecration of a church, Christians commit to celebrating its dedication as a solemnity. In this way, each year in this place on 24 August a solemn Mass is celebrated in thanksgiving for this space which has become sacred, an earthly sign of the heavenly city.

Lord, may this church be for us the dwelling place of salvation and the place of the sacraments ; may the good news of peace be proclaimed in it, may your mysteries be celebrated in it ; in this way your faithful, fortified by the Word of life and by grace in their journey through the earthly city, will reach the eternal Jerusalem, where you will be so good, O most kind Father, to gather your scattered children.
From the Liturgy of Consecration

Meditation on the Chapel of St Emerentiana

In this space, the whole sacred history of God and men.
All the divine force of attraction and all human rising !
The rainbow links the crucified and risen one with the Virgin and Child.
At its summit, a joint which is the meeting place.
“Risen from the earth, I will draw all to myself.” It’s just above the altar.
In the arch thus let loose, all of history in the shadow of the cross of glory.
All of life rising and converging.
In the beginning, at the principle, the Living and Eternal one. “The Eternal one is seen.”
On the same level, above the altar, three shafts of light cut across.
“In the name of the Father, and of the Son, and of the Holy Spirit.”
A unique “presence of light”.
In the beginning again the Word made flesh.
“The life which is the light of men.”
The One who is “light of the world” comes into the world.
In descending, he calls humanity to rise to its greatest height.
Light faces the Light ; the spouse is lit by her Beloved.
In his light is our light ; she is made beautiful by her Lord.
“Everything which is mine is yours.” “You are the light of the world.”
To get there, for this long Assumption to be realized,
for the end to join the beginning,
for the rising waves, mingled with shadow and brightness,
to throw themselves into the eighth cross-shaft of light,
for the promises of our baptism to be fulfilled on this eighth day,
for our “giant’s race” to be finished.
From the centre, from the altar,
On the right six vertical shafts of light, the six days of Creation.
“An evening, a morning : good, very good !”
On the left three shafts, faith, hope and charity.
A gift beyond all gifts, the perfect gift : forgiveness !
From the back, between the four windows, the four elements of the cosmos,
the four cardinal points.
What incredible thrust ! What an immense movement !
The Spirit who leads the living stones of the Church on earth
to the living stones of the heavenly Jerusalem !
Around Our Lady, figurehead of the Church, Queen of the apostles,
as at Pentecost,
In downstrokes and upstrokes, twelve arrises : the Twelve.
In this space, for a moment, you come and take your seat.
With those who are there whom you see.
With those you do not see
because they are no longer there,
because they are not yet there.
With all your human brothers and sisters,
open yourself to the One who comes !’
Together, here and now, we are humankind come from the future !