The Marian shrine of Venasque 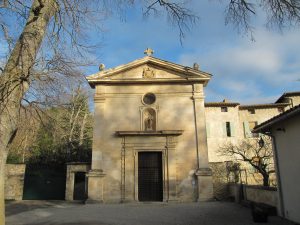 The shrine of Notre-Dame de Vie dates back to the origins of Christianity in the region.

« God’s reason for choosing one particular place to be worshipped rather than another is his secret. » (Saint John of the Cross)

As early as the end of the fourth century, a Christian community was already in existence in Venasque, as is attested by the tombs that have been recently uncovered at the foot of the towers of the village. This community rapidly became important enough to have a bishop, whose residence was either in Carpentras or in Venasque.

Among these first bishops was Saint Siffrein, a monk of Lérins, whom the region’s inhabitants snatched away from his monastery and made their minister. Tradition has it that in this sixth century, this monk-bishop, who was a friend of St Caesarius of Arles, had three churches built : one dedicated to the Mother of God, another to the Trinity and the third to St John the Baptist (this last would become the baptistery of Venasque). The same tradition places the church dedicated to the Mother of God on the site of a pagan temple on the bank of the Nesque, where the shrine of Notre Dame de Vie stands today.

As for bishop Bohétius, whose tombstone can be found at the end of the chapel of Notre Dame de Vie, he was bishop from 583 to 604. This slab was exhumed when the shrine was rebuilt at the end of the sixteenth century. It bears this inscription :

Here rests (a man) of good memory, Bohetius, bishop, who lived in the episcopate for 20 years and 6 months ; he died on the 10 of the calends of June. 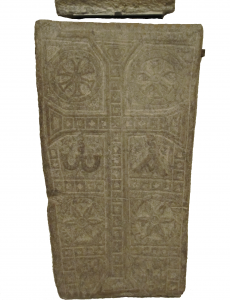 The little church of ‘Santa Maria de Vico’ – this was the name given to it in the Middle Ages – was to know the ups and downs of time, but it remained a place of prayer at the heart of the Comtat Venaissin. 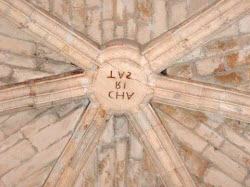 In 1613, the religious Order of Minims, disciples of St Francis of Paola, were called on to welcome pilgrims to the shrine which had just been rebuilt.

Their device ‘charitas’ inscribed on the keystone and above the entrance door, bears witness to their presence.

« Santa Maria de Vico » became « Nostra Domina de Vita », and the lives of little children were entrusted to her. At that time there were many pilgrimages organized by the region’s parishes.

Then came the Revolution which took a heavy tribute from Venasque : more than twenty people in the small town were executed, the Minims were driven out and their monastery sold at auction in 1792.

In 1806, Fr Morel, a priest of Saint-Didier but originally from Venasque, who had escaped the torment of the Revolution, bought back Notre Dame de Vie and the pilgrimages started up again.

In 1929, a lady from the Paris region, Mrs Lemaire, settled at Notre Dame de Vie. She bought the buildings, thinking that the climate would be better suited to the health of her little girl, but the latter died in 1931. Mrs Lemaire then offered the shrine and property to the Carmelite friar Fr Marie-Eugene “for a Carmelite work“.

Notre Dame de Vie is the Institute’s house of formation and replenishment for the members who learn silent prayer here, under the guidance of the Carmelite saints : St Teresa of Avila, St John of the Cross and St Thérèse of the Child Jesus.

Fr Marie-Eugene died on 27 March 1967, Easter Monday, a day when he liked to celebrate the Easter joy of Mary Mother of Life. His cause for canonization is in progress and the pilgrims who continue to pray to the Virgin Mary (especially on Easter Monday, the Ascension and 15 August) also call on Fr Marie-Eugene whose tomb can be found at the foot of the statue of Our Lady of Life, in the choir of this chapel.