The Prophet Elijah, « a solitary contemplative caught up in the life of his people »

He is living, the Lord in whose presence I stand… I burn with zeal for the Lord God of hosts. 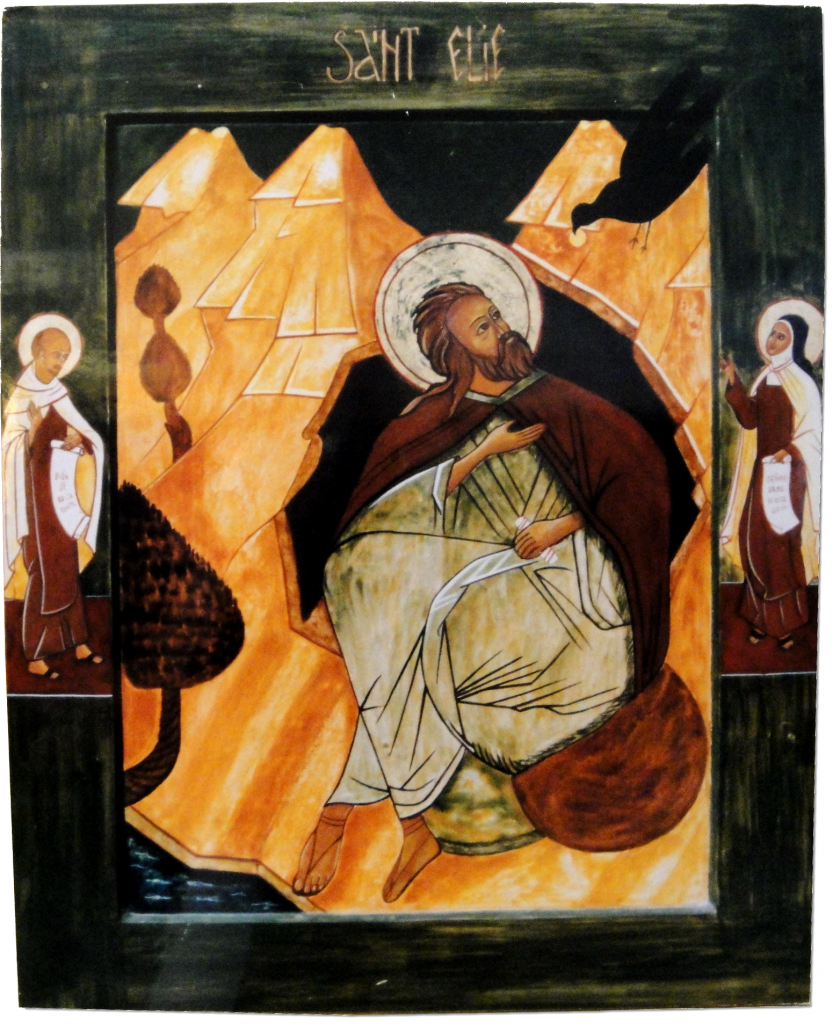 Written in Latin on a mosaic around the crest of the Order of Carmel, the Prophet Elijah’s « motto » appeared on the floor of the monks’ refectory at Petit Castelet, Fr. Marie-Eugene’s convent near Tarascon. Born in the Holy Land, on Mount Carmel, which overlooks the bay of Acre, the Order of Carmel traces its foundation back to Elijah, this highly colourful character whose heroic feats in that region are recorded in the Bible.

Consisting of two sentences from the prophet Elijah (1 Kings 17,1 and 1 Kings 19,10), this motto summarised, according to Fr. Marie-Eugene, the two inseparable poles of the Carmelite vocation. They are also for him the two poles of the life of the baptized, the missionary disciple of Christ in the world : a call to live a close relationship with God in silence, where « the Father dwells in secret » (Mt 6, 6) and a call to bear witness to the Gospel among one’s contemporaries. It was necessary to go back to that Biblical source in order to offer the authentic spirit of the Carmel to today’s world.

The first part of the motto expresses the usual attitude of the prophet, which is inherently contemplative.

The man of action, endowed with an often rough and even violent exterior, but also with an elevated and delicate soul, and with a penetrating and purified glance of faith, begins his mission paradoxically with a long time spent in solitude, by the stream of Cherith (1 Kings 17, 2-6). His vocation sets him apart, far away from his community, and draws him to the desert. There he learns how «to stand in the presence of the living God». There, in solitude, marvelous exchanges are established between God and the soul of the prophet. God gives Himself with a generosity that is often increased because of the infidelity of his chosen people. He satisfies in the prophet His need to pour out His Love [3]. The founding experience of the prophetic vocation is that of a gratuitous, delicate and powerful love, God’s love always in movement in order to give itself.

Separated from the world for a while, the prophet quenches his thirst for God, but also God’s thirst to give Himself. By giving himself to God’s love in solitude, he enters the movement of love itself and burns with zeal and apostolic fervour, now totally free to be at the Lord’s disposal : He has no fixed abode ; he goes where the Spirit moves him [4]. Supple and flexible, this solitary contemplative is caught up in the life of his people. His external actions are most important in the history of Israel of his time [5]. He is prompted to bear witness to God, to His existence, His life. (Carmel 88, 237).

At a time when, according to his sarcastic expression, Israel « was hobbling on two feet », turning away from the one God, Elijah challenged the prophets of the false gods and managed to lead his people back to the profession of faith of the Covenant : « The Lord, he is God; the Lord, he is God ! » (1 Kings 18, 39). Withdrawing to the summit of Mount Carmel, he delved into prayer, praying for the end of the drought. Then he saw in the little white cloud rising from the sea the prefiguration of the Virgin Mary, the one who will « rain down the Righteous One » (Is 45,8). Then he ran before Ahab’s chariot (1 Kings 18, 46).

Is the prophet a superman ? No, he is a poor man who experiences his weakness. He is harassed, discouraged by persecution : « It is enough; now, O Lord, take away my life, for I am no better than my fathers. » (1 Kings 19, 4).

Is the prophet a superman ? No, he is a poor man
The trial is permitted by God. After his triumph the instrument must find his true condition once again. (…) The body and all the natural faculties which have irresistibly been driven into action by a superior force, take revenge and they do so by letting the soul feel the heavier weight of their weakness. (Article about Elijah 1927) Lifted up by the power of the Spirit, the prophet is suddenly left to his own strength and he understands through this trial that he cannot achieve anything by himself. This is a salutary awareness : it is the interior humiliation of the divine instrument and of the contemplative, but as it deepens his soul, it prepares him for new graces and a new mission. (Article about Elijah 1927)

From this example taken from Holy Scripture Fr. Marie-Eugene retains a precious insight : the harmonious union of contemplation and action that the prophet shows forth in his life [6]. This balance makes the perfect apostle [7]. Where does it come from ? Not from a wise balance established by the reason ; balance and synthesis are realized in the life of the prophet by the very God who has seized him and moves him [8]. The example of Teresa of Avila thirsting for silence and solitude, and taking to the roads of Spain in order to found monasteries shows this clearly. As a child she said : « I want to see God ! » ; as she was dying, she said : « I am a daughter of the Church. » Is she not echoing the prophet’s motto ?

How can we live today on this Elianic and Teresian spirit ?

In experiencing the daily desert of silent prayer which restores our strength and gets us going again. On the day of his death, Fr. Marie-Eugene said to the members of the Institute which he had founded to live on Elijah’s spirit in today’s world : Remain faithful to the essential : action and contemplation well united. This recommendation came from a consideration of God himself : God is contemplative, He is also pure act. It is a perfect imitation of God which we try to achieve when we unite action and contemplation. (En marche vers Dieu)

As a true son of Elijah, his word was blazing like a torch (cf. Si 48,1). We were thinking that with his faith he has touched God. He spoke as easily about the transcendance as about the simplicity of God. He radiated His presence. (A Carmelite nun) (MM Sauveur, Carmel 1988)

He was dedicated to God alone, but he was totally, passionately dedicated. Elijah could not have reproached him for « hobbling on two feet ». Really, with a rare intensity he was « a man of God ». (A Carmelite friar in his province) (Carmel 1988, 210-212).

He was filled with the urgency of the Kingdom and he communicated this passion to us… The mission, the Church, to set fire to all parts of the world… These were topics which He often talked about. (A Nun)

Fr. Marie-Eugene, this vigorous man, rough at times, but also full of humanity, was a religious man passionate for God and for evangelization through prayer (…) His eyes reflected the peace and the joy of holiness. (A member of ND de Vie) (Lettre Cause 19, p. 19)